Get it from packtpub.com before its gone.

On display at SXSW in Austin, Texas, Sophia is the company’s latest attempt to create a human-like robot, and the way her face moves is probably as human-like as a robot has ever gotten.

Sophia has 62 facial and neck architectures and a patented silicon skin called Frubber. She has cameras in her eyes that allow her to recognise faces and make eye contact. And she can participate in a conversation, using speech recognition software. She is even equipped with what Hanson Robotics calls its “Character Engine AI” software, or a personality.

German automobile manufacturer Mercedes-Benz has begun replacing robots on its assembly line with people. The robot workers aren’t always able to handle the complexity of individual tasks and often take longer to reprogram for a new model. The company has deemed human beings more adaptable, and workers are being brought in to replace robots at production jobs in the Mercedes-Benz factory in places where there is an increasing number of part options. Read more

An Introduction to #ROS aka #Robot #OperatingSystem: The Ultimate Robot Application Framework

Robot Operating System in short ROS is not an actual operating system, but a framework and set of tools that provide functionality of an operating system on a heterogeneous computer cluster. Its usefulness is not limited to robots, but the majority of tools provided are focused on working with peripheral hardware.

ROS is split up in more than 2000 packages, each package providing specialized functionality. The number of tools connected to the framework are probably its biggest power.

Read getting started guide on @toptalllc

HORNET is a prototyping platform released by Maker Club. Currently, the microcontroller board is priced on the Maker Club online shop at $54.99 including the flat rate.

Developed by Deepfield Robotics, BoniRob is an agricultural robot that autonomously identifies and eradicates weeds at the rate of one per tenth of a second, considerably faster than humans and more environmentally sustainable than dumping heaps of deadly chemicals.

END_OF_DOCUMENT_TOKEN_TO_BE_REPLACED

#Dobot an #OpenSource #Robotic Arm Kit for Everyone 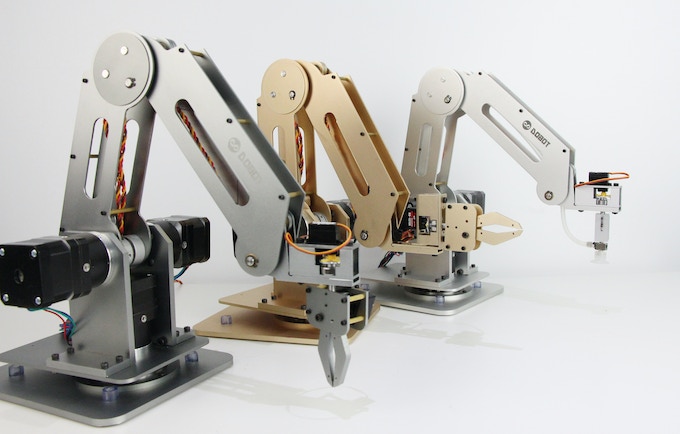 Dobot has been created by a team of six engineers based in San Francisco California and has been designed to provide a 4-axis high accuracy, high repeat precision, stepper motor, Arduino-based, desktop robotic arm for makers, educators and anyone else there would like to learn more about robotics and have their very own precision desktop programmable robotic arm.