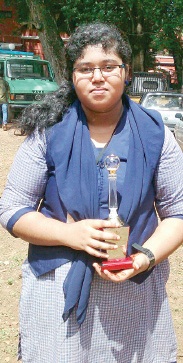 Class IX Student made a little train which needs neither track nor wheels to run? Or the fact that it was made by Fathima Salam, A class IX student of Government VHSS, Kallara, India.

The model of ‘modular train’ controlled by a Raspberry Pi won her the state second place at a coding competition organized by Kerala Startup Mission and IT@School.

A unique thought about a democratised system that can monitor the attendance of officials in government offices earned 14-year-old Manas Manohar the first prize in a State-level coding competition, with a cash purse of Rs. 2 lakh.

During the launch of Raspberry Pi distribution last February, implementing agencies, Kerala Startup Mission and the IT@School initiative, conducted the competition alongside the training sessions in all the district centers for students in programming using the Raspberry Pi kits.

END_OF_DOCUMENT_TOKEN_TO_BE_REPLACED

Adding a massive feather to its renewable energy cap, India now lays claim to the world’s first fully solar-powered airport. Located in the coastal city of Kochi in the southwestern state of Kerala, the newly inaugurated solar plant brings India one significant step closer to securing its position as a frontrunner in the global solar race.

The 12 MW solar plant occupies 45 acres of land near the airport’s cargo complex and is comprised of some 46,000 PV panels. It is expected to generate 48,000 kWh of electricity per day. When combined with an already existing solar array installed at Cochin International in 2013, total daily electricity output will be roughly 52,000 kWh – enough to exceed the airport’s electricity needs and making it “absolutely power neutral.”Cochin International Airport consumes approximately 48,000 kWh per day.

7500 #Kerala School Students to get  #RaspberryPi Kits – Is there any other #Indian state government taking such initiative, leave your comments.

#Kerala government will distribute 7,500 #RaspberryPi computer kits to school students this academic year to initiate them in to the world of coding. “Already, 2500 students in class eight across the 14 districts had received the kits. About 150 teachers had already received training from IT@School under the Raspberry project,” he said.

The Kerala Startup Mission (KSM), a joint association of Technopark in Thiruvananthapuram and the Centre’s Department of Science and Technology, has shifted its plans to the top gear aimed at identifying the budding entrepreneurs in schools and nurture the start-up plans of youngsters on the college campuses through a series of innovative projects.