A 31-year-old AI engineer has married one of his robot creations. Zheng Jiajia, who used to work for Chinese telecoms giant Huawei, held an informal wedding ceremony for himself and his robot wife in Hangzhou, local papers report.

END_OF_DOCUMENT_TOKEN_TO_BE_REPLACED

#Facebook CEO Mark Zuckerberg has finished building Jarvis, his home AI assistant. It can turn lights on and off, play music based on the personal tastes of both him and wife Priscilla Chan, automatically open their front gate for friends, make toast, and even wake up their one-year-old daughter Max with Mandarin lessons.

What is difference between #ArtificialIntelligence, #MachineLearning, #NaturalLanguageProcessing
Two phrases in particular, though, are often incorrectly used as an alternative to AI: Natural Language Processing (NLP) and Machine Learning (ML).

To clarify the differences between them, here’s a (very) short (and easy-to-remember) summary:

On display at SXSW in Austin, Texas, Sophia is the company’s latest attempt to create a human-like robot, and the way her face moves is probably as human-like as a robot has ever gotten.

Sophia has 62 facial and neck architectures and a patented silicon skin called Frubber. She has cameras in her eyes that allow her to recognise faces and make eye contact. And she can participate in a conversation, using speech recognition software. She is even equipped with what Hanson Robotics calls its “Character Engine AI” software, or a personality.


That robot you see being pushed around is the latest generation of Atlas, the insanely advanced humanoid robot as built by the Google-owned Boston Dynamics.
August 13, 2015 DIYI Team 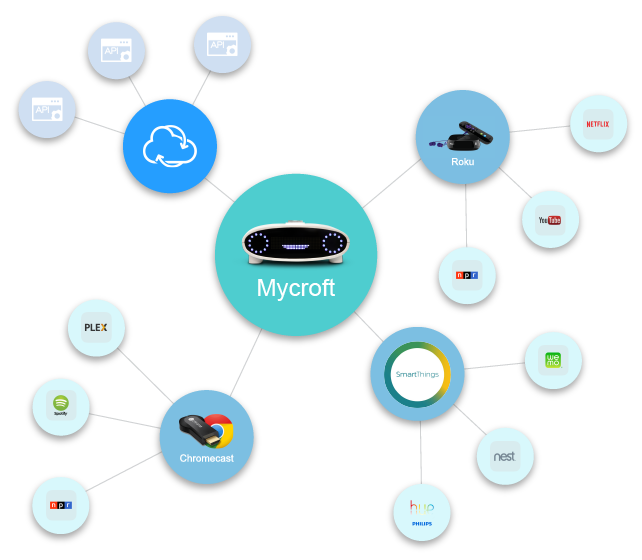 Because it is an open source and open hardware platform, the possibilities are nearly infinite and are only limited by the capabilities of the developers, makers and tinkerers themselves.

The system works by using natural language processing to respond to your voice and is capable of responding to many commands that are likely to be used in today’s era of online services including YouTube, Netflix, Pandora, Spotify and others.  According to the team, saying a specific command such as “Mycroft, play ‘Uptown Funk’ from YouTube on my Chromecast” is all that is needed.

But connecting to existing online media streaming services is only a small part of what Mycroft is capable of.  Additionally, users can program it to post to their Facebook account, control a Roomba, start a 3D printer, or even control their smart home appliances such as a SmartThings hub, WeMo devices or Phillips Hue lights.  Additionally, since the platform’s core is built off of the Raspberry Pi 2 and Arduino platforms, the amount of free online tutorials and documentation for expanding the capabilities to other connected devices is seemingly limitless.

Driving a car will be illegal by 2030. Our economy will be severely impacted as millions of truck drivers, cabbies and delivery people are put out of work. In this era of endless innovation, man’s century-long relationship with the automobile is about to be permanently disrupted.

The reason has nothing to do with millennials, Uber, climate change or improvements in mass transportation. Driving should and will be made illegal because we now have the technology to prevent deadly traffic accidents; one of the greatest causes of premature deaths around the globe. More than 1.2 million people are killed in car accidents globally each year (which is more than the total casualties suffered by both sides in the Korean War).

Read more Driving Your Car Will Soon Be Illegal | TechCrunch.